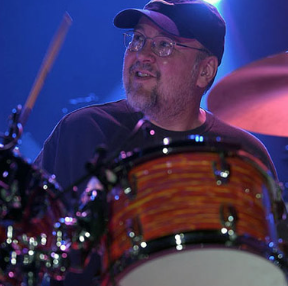 Bun E. Carlos, born Brad Carlson, is the primary drummer for American rock band Cheap Trick. He is the band’s chief set-lister and archivist, and maintains recordings of all the band’s shows, some of which have been released under the name “Bun E’s Bootlegs”.It was announced in early 2009 that Bun E. Carlos had, together with Hanson singer Taylor Hanson, former Smashing Pumpkins guitarist James Iha and Fountains of Wayne bassist Adam Schlesinger, formed a new band called Tinted Windows. This new project ran alongside each of the artists’ main bands. Their first album was released on April 21, 2009.In 2011, Bun E. Carlos once again debuted a band at SXSW in the form of his new project Candy Golde. Featuring an all-star cast, the other men of Candy Golde are Nicholas Tremulis, John Stirratt (Wilco, the Autumn Defense) and Rick Rizzo (Eleventh Dream Day). Mark Greenberg (the Coctails) was added to the band when they started to play live shows. The EP contains four originals and a cover of Paul Simon’s “Boy in the Bubble”, issued for limited edition 10″ vinyl and download on Ten O Nine Records.