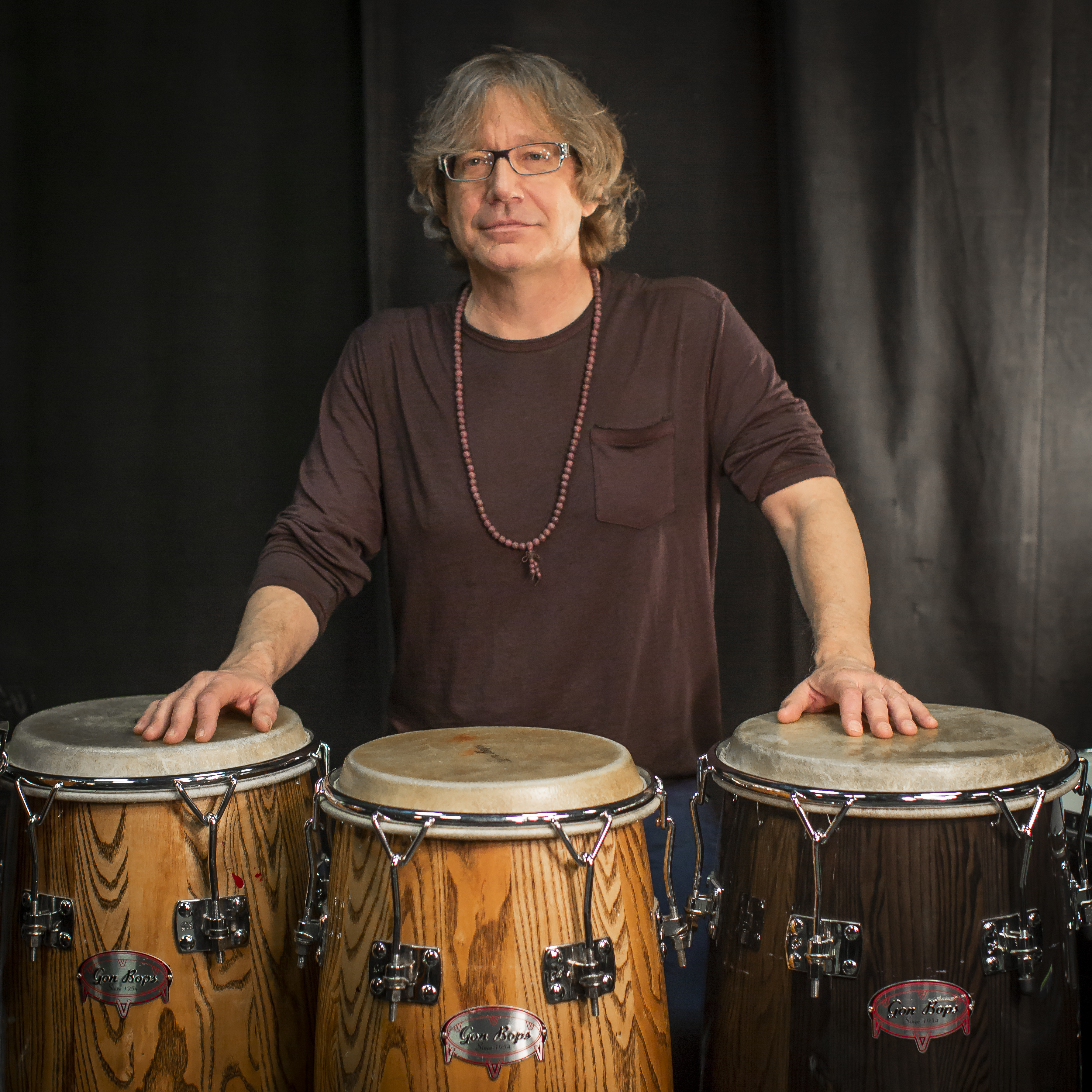 John Bush, drummer and percussionist, is an original member of the multi-platinum band, Edie Brickell & New Bohemians.  Bush is also a songwriter with four self-released albums of original music.  He is currently working on a second cd from his group, The John Bush Band.  John has recorded and performed with an amazing collection of artists, including Spin Doctors, Blues Traveler, MC 900ft. Jesus, Critters Buggin and Greezy Wheels, but his work with Edie Brickell & New Bohemians highlights his career.

John Bush began his life journey in several small towns in Texas, before moving to Dallas with his family at the age of 14.  Early on, John showed a huge fascination with music.  He loved listening to his Dad’s record collection and grew up loving the many different forms and rhythms available to him.

He wanted to play drums almost from the very beginning, more than any other instrument, but growing up in the Bush family meant one was required to take a year of piano, before moving on to another instrument.  John studied his piano and bought his first drum set with money he earned from a paper route.  He learned to play them by jamming with his favorite LPs.

In Dallas, John attended The Arts Magnet High School at Booker T. Washington, where he began more formal training in percussion and music theory.  While at this school for performing arts, John met Brad Dutz, now also a Gon Bops endorser.  Brad was attending the music school at North Texas State University and was brought in to teach Afro-Cuban percussion at the high school.  Brad helped John acquire his first percussion rig from a band mate of his: a pair of congas, bongos, and accessories.

John has studied with a variety of great teachers over his career, including Mingo Lewis, whom he met through Akbar Moghaddam in San Francisco, during the early years of Edie Brickell & New Bohemians.

John is also a producer and engineer who has recorded thirty full-length recordings for many prominent Texas artists in a wide variety of musical styles.  Among many others, he has worked with Ruthie Foster, Paula Nelson, David Garza, Patrice Pike, Redd Volkaert, Greezy Wheels, The Small Stars, The Drakes, Bubba Hernandez, Kem Watts, Giuliana Millanta and The Reveleros.

“I love my Gon Bops Congas!  Lately, I’ve been using a set of three Alex Acuna Series Congas, the Quinto, Conga and Tumba.  I also use the Alex Acuna Bongos and the Tumbao Series Timbales.  I love the rich, deep tones of these drums.  They record beautifully and cut nicely in live performance.  I’ve also been a big fan of Pete Englehart Bells since the ‘80s.  I have a wide variety of his stuff.  I also love the Alex Acuna Bells.  They are very musical, with very nice tonality.    I also love the new Gon Bop Pandeiros.  Though I don’t play them in a traditional style, I find them useful in a variety of ways.  With singer/songwriters, I’ll sometimes use them instead of a snare drum, using brushes or broomsticks.  You can tune them down for a tom sound or deeper snare, or tune them higher and use them for accents, like a timbale.  I use them with cowbell and bongo patterns to make organic-sounding drum machine grooves.  They have an amazing number of applications in my percussion set.”

born in: greenville, texaslives in: austin, texasdrumming since: i was a kid but bought my first drum when i was 12, or 1975.current projects: percussionist with edie brickell & new bohemians, drummer in greezy wheels, music producer in austin texas and owner of cicada moon studios. i get to work on a wide range of musical projects and play drums and percussion on most of the CDs i record and produce. recent bands i worked with include john popper & patrice pike, bubba hernandez, fluoxetine, fosskit #5, greezy wheels, McLemore avenue, the korkus.

biggest influences: for congas and percussion i'd say airto was a big early influence as well as mino cinelu, nana vasconcelos, trilok gurtru and alex acuna. then i got turned on to los muniquitos de mantanza, mongo santamario and ray barretto. for drum set i grew up digging mitch mitchell and keith moon then got more into charlie watts, jim keltner, steve jordan and guys like that.favorite album i played on:  stranger things, edie brickell & new bohemiansfavorite album i didn't play on: that's a tough one. miles davis's big fun or in a silent way, or the stones exile on main street.career highlight: also a tough one but maybe earth day 1990 in central park with edie brickell & new bohemians. 750,00+ people. also got to play drums behind james brown for a coffee product in a Japanese commercial in 1995. it was only a few seconds of a musical spot but still my drums are on a recording with james brown!