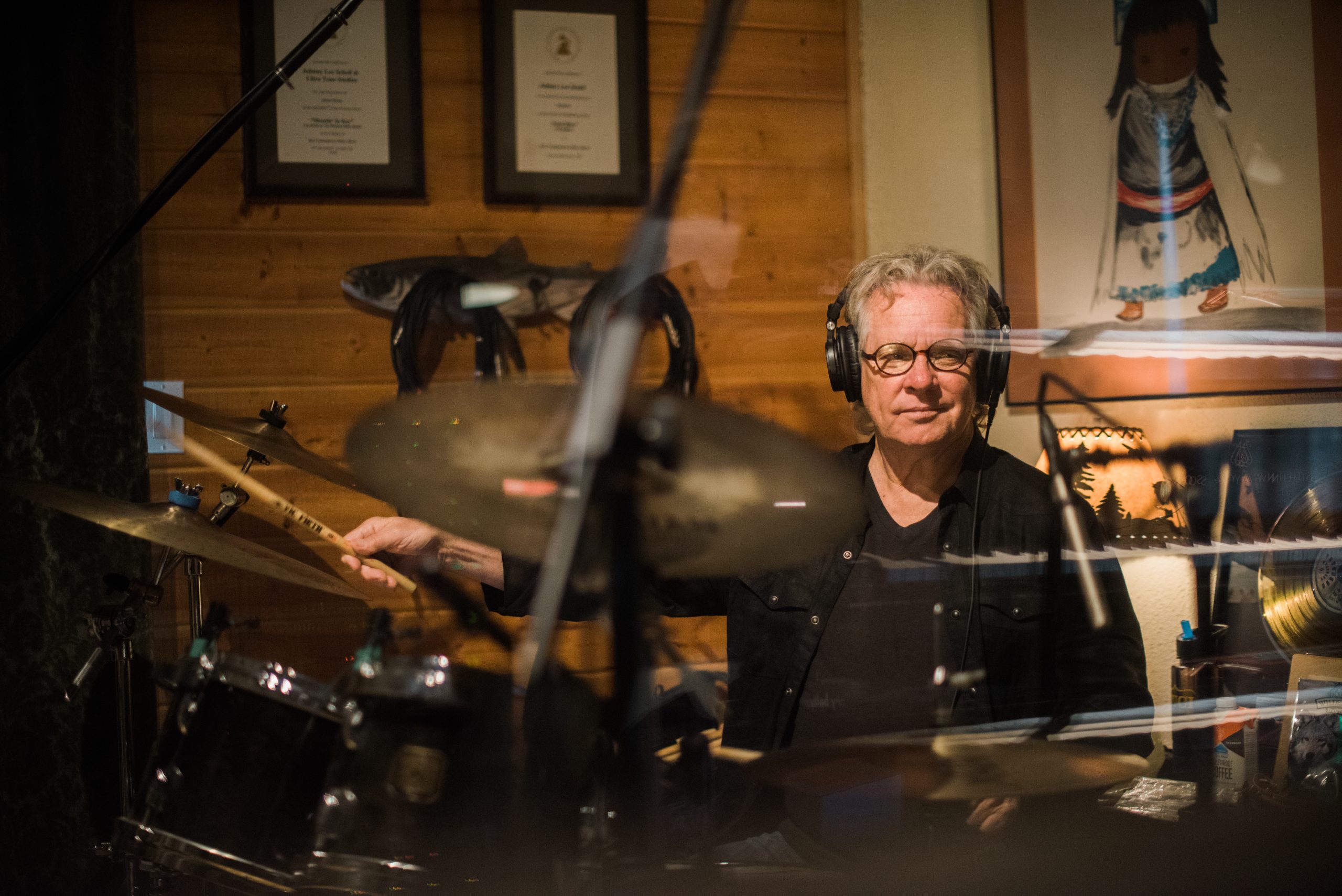 Tony Braunagel is an American drummer, producer and songwriter from Houston, Texas, United States based in Los Angeles, California. Braunagel has played on many film scores and television shows as well as numerous albums as a musician, composer and producer. He is best known as a session drummer and/or percussionist of over 200 albums including those of Otis Rush, Eric Burdon, Johnny Nash, Coco Montoya, Lucky Peterson, as well as Grammy winning albums of Bonnie Raitt, Taj Mahal, Buddy Guy (percussion) and for performing live with dozens of music icons including Bonnie Raitt, Rickie Lee Jones, BB King, Lightnin’ Hopkins, John Lee Hooker, Robert Cray, Bette Midler, Lyle Lovett, and Taj Mahal to name just a few.

Braunagel’s recording and performing career encompasses numerous and diverse rhythms and drum styles, but he is most known for Rhythm and Blues, Blues, Americana Rock ‘n’ Roll, Blues shuffle, Back Beat, as well as his own blend of Reggae and West African rhythms.

Several of the albums produced by Braunagel have been nominated for and won Grammy and Blues Music Awards, reached Billboard charts, Living Blues charts, Roots & Music reports, and many Blues blog charts around the world, including albums by artists such as Taj Mahal, Eric Burdon, Coco Montoya, Danielle Nicole, Phantom Blues Band, and Curtis Salgado.

Anthony Michael Braunagel grew up in Houston, Texas, United States. His father was a country music fan, played some guitar, and surrounded him with music. Braunagel’s first experience on the drums was playing his cousin’s drumkit as a child, before being mentored by his neighbor (now life-long friend) Willie Ornelas.

At the age of 15 he bought his first drumkit from Ornelas and performed live for the first time shortly thereafter when Ornelas got him (actually, more like shoved him into) his first nightclub gig. Soon after, he became involved in the then-upcoming Houston R&B scene, honing his skills by playing in local joints and nightclubs.

Braunagel’s early drumming career included playing in several local bands, such as Soul Brothers Incorporated, The Jokers, and Buttermilk Bottom. The latter got a record deal with Polydor and released a single. After the demise of Buttermilk Bottom, he then teamed up with Andy Chapman (vocals), Jimmy Don Smith (guitar) and then David Kealey (guitar), Michael Montgomery (keyboards), and Terry Wilson (bass) to form The Bloontz All Star Blues Band. In 1971, the band moved to New York under the auspices of producer Ron Johnsen, shortening their name to Bloontz and scoring a contract with the Evolution label. Bloontz recorded one album at Electric Lady Studios, after which in 1973 Braunagel and Wilson toured with Johnny Nash becoming part of his latest Sons of the Jungle line up.

Braunagel wrote a song for Johnny Nash’s Celebrate Life album in 1974 called Standing in the Rain. Soon after, Braunagel with his battery mate, bassist Wilson, accepted an offer from Island Records to move to London in order to work with John “Rabbit” Bundrick, and several other Island artists. While in London, he was the house band drummer for Island Records as the Texas Rhythm Section along with Wilson on bass.

While in London, he met ex-Free guitarist Paul Kossoff and, together with Wilson and Montgomery from his former band, Bloontz, they formed Back Street Crawler. The band also included Terry Wilson-Slesser on vocals and later John “Rabbit” Bundrick, who replaced Montgomery on keyboards following the release of the band’s first album The Band Plays On (Atco Records).[ They recorded a further album 2nd Street prior to Kossoff’s death in 1976 after which the band the band decided to stay together. They added Geoff Whitehorn on guitar, and shortened its name to Crawler. This incarnation of the band moved to Epic Records, recorded two more albums, and embarked on several America tours, sometimes supporting stadium acts such as Kansas and Foreigner, Rush, and Robin Trower.

In 1979, Braunagel relocated to Los Angeles where he found work touring and recording with artists such as Eric Burdon, Rickie Lee Jones and Bette Midler. In 1984, Braunagel took the drum stool in Bonnie Raitt’s band, playing on the albums Nick of Time and Luck of the Draw, and touring with her until the early 1990s. He also spent several years touring with Taj Mahal and The Phantom Blues Band.

In addition to playing drums and producing music, Braunagel is also a songwriter. He is a Blues Music Award winner. He has been nominated for Blues Music Award in the ‘Best Instrumentalist – Drums’ category twelve times winning in 2018. Braunagel’s recording credits include film scores and television shows as well as numerous albums as a musician, songwriter and producer. In the mid-90s Braunagel also produced several commercial jingles. In 2017, Braunagel appears on MEG Records/Nashville artist Tom Maclear’s Gods and Ghosts.

Throughout the 1990s, Braunagel played on many award winning albums. Braunagel has also produced over 20 artists in connection with more than 40 albums. Sessions include drumming on two Grammy Award winning albums by Taj Mahal and The Phantom Blues Band – Señor Blues and Shoutin’ in Key,(Grammy winner, BMA winner) the latter of which Braunagel produced. His recordings with Taj Mahal and the Phantom Blues Band also won the 2001 W.C. Handy award for Band of the Year. Braunagel also recorded on Buddy Guy’s Feels Like Rain (Grammy, Best Contemporary Blues Album, 1994) , Bonnie Raitt’s Nick of Time (Grammy, Album of the Year, 1989), Bonnie Raitt’s Luck of the Draw (Grammy, Album of the Year, 1991), and on Trampled Under Foot’s Badlands (BMA Contemporary Blues Album of the Year, 2014) which he also produced.

BORN IN:Houston, TexasLIVES IN:Los Angeles, California DRUMMING SINCE:1964CURRENT PROJECT(S):I’m producing several artist’s, one that I got a Grammy nomination a couple of years ago and her name is Danielle Nicole. I’m also finishing up a couple of more studio production projects.

BIGGEST INFLUENCE(S):The list is so long but I can definitely mention a few. Earl Palmer, Elvin Jones, Al Jackson Jr., Zigaboo Modeliste, Bernard Purdie, Steve Gadd, Jim Keltner…It really depends on the style that we are discussing. FAVORITE ALBUM YOU PLAYED ON: Well that would also be several. I played on “I Can’t Make You Love Me”, the single by Bonnie Raitt (in the Grammy Hall of Fame) as well as the album won a Grammy. I played on a version of “The Thrill Is Gone” on a live session with B.B. King as a duet with Tracey Chapman. I produced and played on a live album with Taj Mahal and the Phantom Blues Band that also won a Grammy. Several other Taj Mahal albums were a complete musical experience for me as well. The list is not simple. FAVORITE ALBUM YOU DIDN’T PLAY ON:A Love Supreme by John Coltrane with Elvin Jones on drums. CAREER HIGHLIGHT:I don’t have one highlight.  I’ve had so many great musical experiences, both live and in the studio…it’s one big highlight in life.