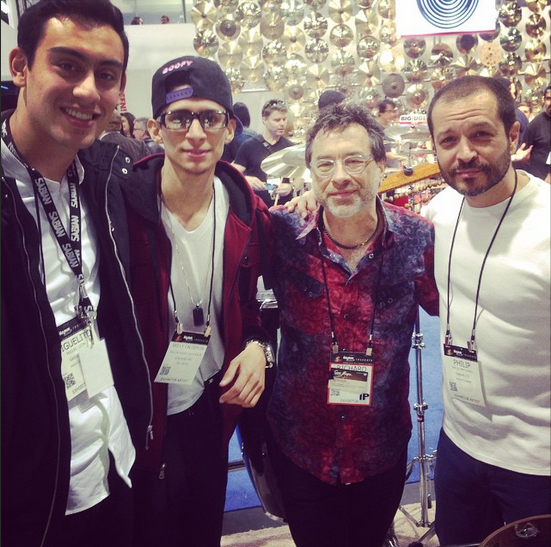 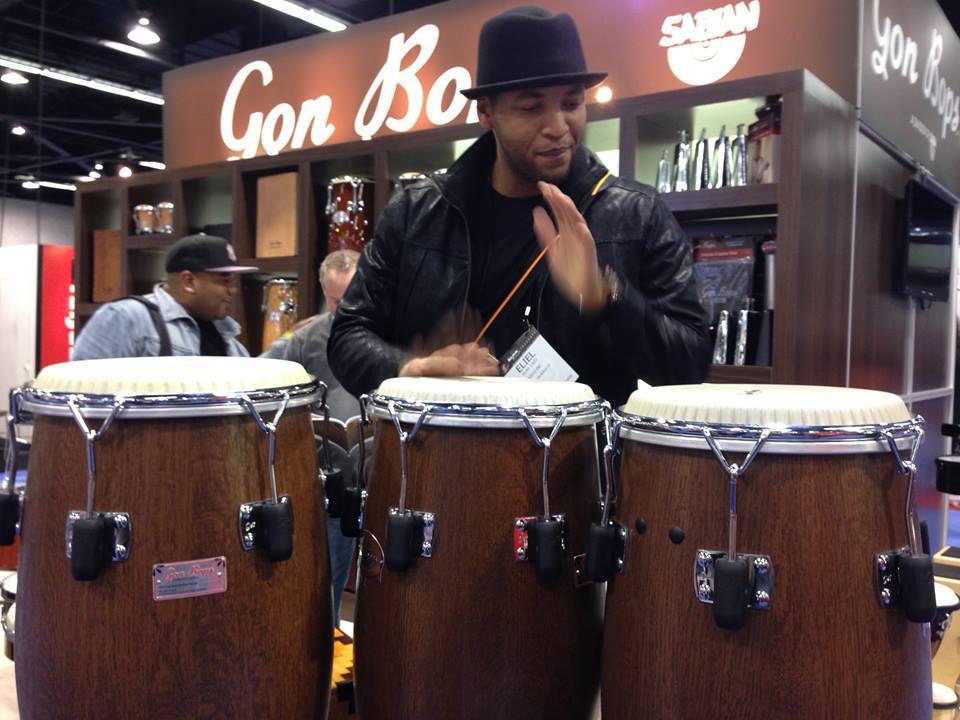 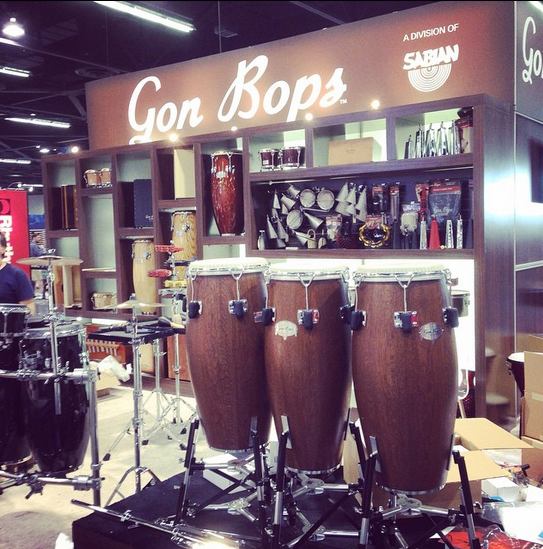 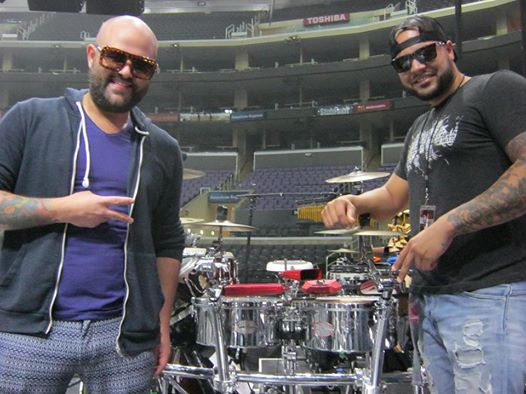 Gon Bops’ own Rich Mangicaro recently met up with Pitbull’s Omar Tavarez & Papayo Corao for a hang and a chat. It was a great opportunity to pick their brains on everything from soloing as a duo to their love of Gon Bops instruments.

END_OF_DOCUMENT_TOKEN_TO_BE_REPLACED

2014 marks a milestone in the world of percussion instrument manufacturing. It was 60 years ago this year, that a Cuban-American named Mariano Bobadilla first started his company Gon Bops, humbly in his father’s old garage in downtown Los Angeles, California. Along with featuring a classic Cuban conga shape, Bobadilla’s innovations broke new barriers, including revolutionary hardware design, exciting new instruments and other creations now considered standard today. Some of the world’s most iconic and influential percussionists made Gon Bops their instrument-of-choice including Mongo Santamaria, Francisco Aquabella, Armando Peraz, Poncho Sanchez and still to this day, Gon Bops Signature artist – Alex Acuna.

Says Alex, “50 years ago was my first experience with Gon Bops when I played in the LA latin scene with Perez Prado. I continued to play with them into the early 70s with Elvis Presley at the Las Vegas Hilton and then on my first tour with Weather Report. There’s live footage on YouTube with Joe Zawinul, Wayne Shorter, Chester Thompson and Alphonso Johnson, where I’m playing my black Gon Bops Congas, a Tambora and a set of Bongos. They were and still are the best looking and best sounding percussion instruments, by far. I’m still using them on movie soundtracks and last week, I used my Gon Bops congas, djembe, original Bata set and my cajons on the new “Dawn Of The Planet Of The Apes” soundtrack. Looking forward to 50 more years!”

Throughout the 50s, 60s and 70s, Gon Bops rose to become the leader in Latin Percussion, including the predominant percussion instrument at the infamous Woodstock festival. But as the 70s concluded, American manufacturers began moving production offshore in efforts to reduce labor costs and Bobadilla’s effort to remain a true American-made instrument became more and more difficult, eventually causing him to close his doors.

Fortunately for us all, in 2001 the Drum Workshop drum company bought the company with all it’s patents, bringing it back to world prominence. Daniel De Los Reyes: “I am the middle child in a family of 5 kids, with my brother Walfredo Jr. being the oldest. He was able to work before me and afford to purchase his own drums and one day, he came home with two beautiful congas. They were the best looking, most comfortable to play and best sounding drums in the house. They had very dark skin on them and sang every time you played them. For the longest time these drums stayed in my mind as the drums I wanted to have have one day. Guess what? Those drums were Gon Bops and now, I use Gon Bops on tour with the GRAMMY Award Winning Zac Brown Band! Congrats to the GB family on their 60th anniversary.”

In 2010, the Gon Bops’ helm was passed on to a new owner – Sabian, a company highly regarded for its dedication to innovation and true craftsmanship. Looking to the future, Gon Bops is expanding distribution and is focused on continuing groundbreaking designs that fulfill the needs of today’s discerning, eclectic group of musicians. Terry Bozzio says: “The first time I played a Gon Bops conga back in 1971, I got a great sound…and I’m not a conga player! I bought them on the spot! Now I use the whole line! So easy on my hands for a stick player like me!”

Eagles’ Drummer/Percussionist Scott Crago says: “My introduction to Gon Bops was playing on Don Henley’s original 1970s congas, during our Hell Freezes Over rehearsals. Ever since that time, they’ve helped me develop my own personal sound and have even helped me grow as a performer. I can’t imagine playing any other brand.” Legendary percussionist Walfredo Reyes Sr. states: “Congratulations to Gon Bops on 60 years of incredible workmanship. I have played many different percussion instruments throughout my musical career in Cuba, Puerto Rico and the United States on recordings, live shows and clinics. I play Gon Bops because they afford me the ability to get the sound that I am looking for with today’s ingenuity.”

Gon Bops thanks everyone around the world who’ve supported us for the past 60 years and like Alex says, here’s to the next 50…and many more! 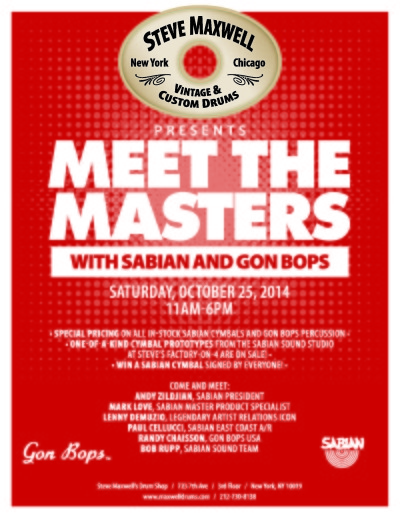 We are happy to announce that California Series Congas and Bongos are once again available from the finest drums shops in the world. The only hand-crafted congas and bongos from a major North-American manufacturer, Gon Bops California series drums have consistently set the bar by which all other percussion instruments are measured. Available in 5 sizes (from Super Quinto to Super Tumba) and two spectacular finishes, these legendary drums are the real deal, on-stage and in-studio. Play one today!

Gon Bops and master percussionist Luisito Quintero recently teamed up to produce a series of product videos, highlighting the legendary, authentic sound across the entire line of Gon Bops instruments.

“It was fantastic to work with an incredible talent like Luisito and to hear these instruments played the way they’re meant to be played,” commented Gon Bops Marketing Manager Luis Cardoso. “Being able to deliver these fantastic videos to our partners around the globe is a huge win for everyone.”

The new videos are available widely at Vimeo.com/Channels/GonBops or YouTube.com/GonBopsTube.

It’s no secret how much RHCP drummer Chad Smith and funnyman Will Ferrell resemble each other. Most recently, this fact led to a hilarious exchange between the two after a Reddit AMA session where Ferrell said: “It has been acknowledged many times that myself and Chad Smith, drummer for the Red Hot Chili Peppers, share a resemblance to each other,” he wrote. “A lot of people think that it’s me playing for the Red Hot Chili Peppers. But that would be an insult to Chad Smith. The truth of the matter is there is no Will Ferrell. Only Chad Smith.”

Chad Smith responded shortly after with a post to Funny Or Die’s Instagram account: “Stop impersonating me! In fact…I need you…Drum battle, me and you. I’ve seen you. I’ve seen your skills. You don’t got ’em. Let’s go.”

Although it took him a few days, Ferrell has now responded to Smith’s challenge, logging on to the RHCP drummer’s own AMA to suggest the two take place in a drumming duel for charity: “Hi, Chad. Will Ferrell here. I saw your video and I graciously accept your invitation to a drum battle,” Ferrell wrote. “If we can raise $300,000 for Cancer For College I will face off with you in the greatest drum vs. cowbell showdown the world has ever seen. We can do it on stage at a Red Hot Chili Peppers concert or in front of a mutually convenient public library. Your call. Also, would you rather fight a hundred duck sized ducks or one horse sized horse?”
Smith has since accepted Ferrell’s challenge after calling the actor “a delusional imposter.”

“He needs to seek professional help because I am obviously more talented and handsome than he is,” Smith wrote in his AMA. “You know, his cowbell work is well-documented, but his drumset skills are nominal based on Step Brothers, the film. Other than wiping his testicles on the drums, which of course I give high marks to.”

All we know is — this is one drum battle we can’t wait to see!